Pictured above:​
Company A in rank

♪♪ Clang Clang Clang Went the Trolley ♪♪
On  October 26, 2017, we celebrated the dedication of the second Ohio Historical Marker in Mason.  Mr. Anthony Gibbs represented the Ohio History Connection at the dedication.  A commendation from the Ohio History Connection was presented to the City and to our Society for furthering the knowledge of our state’s heritage by placing an Ohio Historical Marker that commemorates and honors the legacy of the Interurban Railway and Terminal Company: Rapid Railway and its place in Warren County’s history.  The trolley line carried workers to and from the King Powder Co. and Peters Cartridge Co. during WWI.  There is an Ohio WWI Centennial logo on each side of the marker to commemorate that service by the line.  The marker is at the corner of East Main Street and Dawson Street.
​
Please make a trip to view the marker and learn a little more Mason history.
The marker commemorates and showcases the importance of mass transportation coming through Mason from 1903 to 1922.  The Rapid Railway System was one of the Interurban Railway and Terminal Companies three trolley lines, all of which originated in downtown Cincinnati.  The marker, which is similar to the one at the WLW Tower for the Blaw-Knox antenna, is placed along the route of the trolley/traction line.
​
Take a look below at the Rapid Railway system when it was in use and compare it to what remains today.

In 2013, Mason was named 7th on Money Magazine's list of "Best Places to Live" for families among America's small towns.  Located in southwestern Warren County, this city was started as a humble village two hundred years ago by  Revolutionary War veteran William Mason.  At an auction in 1803, Major Mason paid $1,700 for 640 acres between the Great and Little Miami Rivers from John Cleves Symmes.  In 1815, he platted sixteen lots on his property adjoining Muddy Creek.  He wanted his two-block Main Street to run due east-west, so he angled the existing northeast to southwest road through town (today's Route 42) to accommodate his wish.

Positioned as it was on the Cincinnati-Xenia Road, Mason became a trading center to meet the needs of weary travelers at the turn of the century. Drivers of wagons and stagecoaches drawn by teams of up to eight horses would often fill Mason's many boarding hotels and saloons, lending the town a raucous atmosphere.  Add to that the common occurrence of hogs running wild through the streets, this sleepy farm town was anything but sleepy at times.

With the construction of Interstates 75 and 71 in the 1950s and 60s, the village was starting to experience rapid growth.  In 1971, with the population exceeding 5000, Mason officially became a city.  When Kings Island opened in 1972, the growth continued and has not stopped to this day.  Corporate, retail and residential proliferation, as well as the excellent schools, has made Mason a very desired location to raise a family, which is something that has not changed in the last 200 years.

Take a look below to explore the visual history of Mason, Ohio. 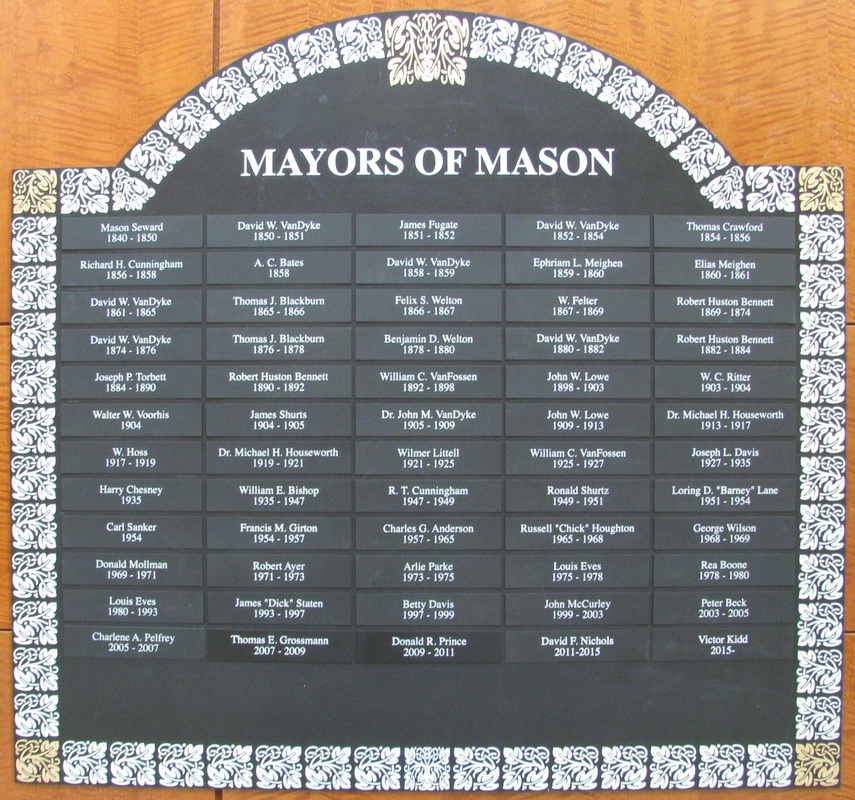 Could it have been coincidental the first name of Mason's first mayor elected in 1840 was Mason, or was it part of a plan?

May we always remember our Mason residents who perished on that tragic day. 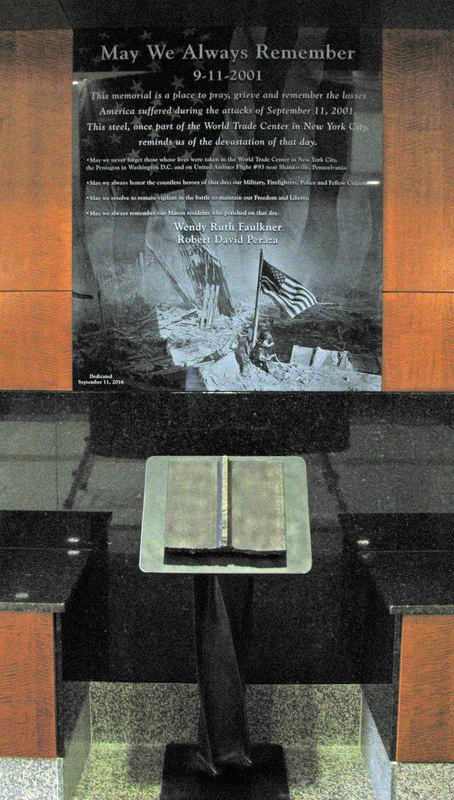 The section of beam is from the World Trade Center. The Memorial is located in the Atrium of the Mason Municipal Center.